Four towns, five sites, five historical figures, hundreds of works to admire… And a single history. This is what Campos del Renacimiento proposes: a novel concept for a museum (territorial museum) which intends to drive economical and tourism expansion in an area rich in culture, faith, art and not simply history but History. With good reason, indeed. The history of Renaissance art in Spain can be considered to have started here, thanks to one of our protagonists: Pedro Berruguete. But before getting to that point in our story, we should move back to where it all started, in Becerril de Campos, to then turn to Paredes de Nava, Cisneros and, finally, Fuentes de Nava.

Campos del Renacimiento’s starting point is in Becerril de Campos, a historical town 15-km away from Palencia’s capital city. There, we will find St. Mary’s Church, which hosts the exhibition “Tierra de María” (‘Land of Mary’). This church houses a number of works by Pedro Berruguete and an important collection by one the town illustrious neighbours: Alejo de Vahía. Turned into a museum already in 1973, this first site, which also features wooden sculptures by Juan de Juni and Francisco Giralte, characterises by being a mainly Gothic-styled building with some Romanic traces and Renaissance and Baroque additions. 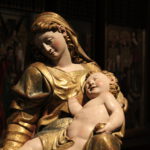 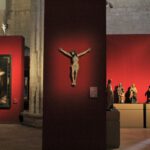 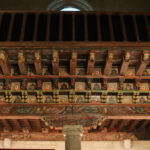 Alejo de Vahía is one of the most mysterious master sculptors from late 15th – early 16th century. Born in northern Europe, he lived in Becerril de Campos, where he worked intensively and left a great number of works. Alejo de Vahía never signed his works, so his relevance has had to be reconstructed thanks to common details in his works and a highly personal style. St. Mary’s Church in Becerril de Campos, one of the Campos del Renacimiento sites, houses the greatest collection of this artist’s works -23 sculptures.

Besides visiting the local site of the museum, there are other highly valuable artistic attractions that can be visited in the area, such as the arcaded square in Becerril, the remnants of its old wall, the St. Martin’s Mudejar Church, St. Michael’s Church or St. Peter’s Cultural Church.

Another non-to-miss stop is one of the three branches in the Castille Canal as it runs through town -the Ramal de Campos branch. It is a well-established part of Becerril’s old town, with St. John’s Bridge built over it.

The second milestone in this exhibition tour is entitled “the Christ and his Church” and is located in St. Eulalia’s Church in Paredes de Nava, which was restored for this very purpose. Different styles can be appreciated in its tower -Romanic, Gothic, Mudejar- and it houses an impressive series of paintings, sculptures, documents and silversmithing pieces, in addition to a unique collection of liturgical clothing. This second exhibition is located in the rooms around the Northern and Southern sides of the temple, and ends with one of the jewels of this tour: the panel paintings of The Kings of Judah, in the main altarpiece of the church, a masterpiece by Pedro Berruguete. Three pieces stand out in the series: the piercing-eyed King David, King Solomon and King Hezekiah.

This second spot will allow us to walk the streets of the most populated town in the province of Palencia until way into the 20th century, and to get to know better three of its most illustrious children: Pedro and Alonso Berruguete, who spent most of their working lives here; and Jorge Manrique, one of the greatest authors of Renaissance literature. 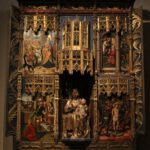 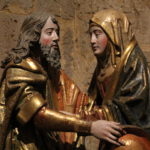 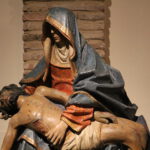 Jorge Manrique was born circa 1440 in Paredes de Nava. A child of the aristocrats Rodrigo Manrique and Mencía Figueroa, he followed in his father’s footsteps in the military. He would later also take up writing. Although his literary production was not very long, 50 poems have survived to the present day, which are typically sorted in three categories: love poems, mocking poems and doctrinal poems. In 1476, he wrote Verses on the Death of His Father, one of the most highly regarded eulogies in Spanish literature.

In addition to the wonders this museum site offers, there are many more interesting monuments to see in Paredes de Nava, such as St. Martin’s, St. Mary’s or St. John’s Churches, St. Brigid’s Convent or Vera Cruz and Our Lady of Carmen Shrines. The Renaissance splendour experienced by this Palencian town reflects in not only those abovementioned religious monuments, but also their manors and arcades, and their squares, rich in architectural elements of high aesthetical interest.

‘‘Our Church’ is the title for the pieces exhibited in this third stop, located this time in all the areas that constitute St. Peter’s Church and that have been remodelled to become a part of this museum-like tour. Its storytelling structure is organised in three segments. The first one introduces us to the town history from its early settlers; the second and wider one features a number of art works, mostly sculptures, which will allow us to understand the Church’s relevance for local people. Finally, the third segment includes a good sample of silversmithing pieces.

The visit to St.Peter’s Church is complemented with an audio visual projection under its magnificent main altarpiece, by Francisco Giralte. Cardinal Cisneros is once again a predominant figure here, a man who got to rule Castille twice and whose ancestors came from this village.

The second site in Cisneros is St. Facundus and St. Primitivus’s Church, which houses the Mudejar Coffered Ceilings Visitors’ Centre in collaboration with St. Mary’s Church in Fuentes de Nava. The provincial artistic heritage of this ornamental style becomes apparent in the large number of samples of Mudejar ceilings preserved here; the most outstanding ones, due to their beauty and quality level, are those in this temple, restored by the Castille and Leon Historical Heritage Foundation in 2010-2011. 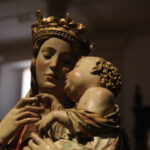 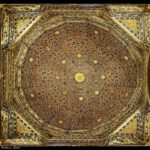 Francisco Jiménez de Cisneros was a Catholic Church’s cardinal and archbishop, devoted to the transformation of religion and the promotion of culture and knowledge. Born in Torrelaguna, his origin is nonetheless located in the town of Cisneros, Palencia, being the burial place for many of his relatives. Cardinal Cisneros studied in Burgos, Madrid, Salamanca and Rome, an education that led him to enter the Franciscan order and, later, to become Queen Isabella’s private Confessor and Provincial Minister. In that position, he was responsible for a deep reform within the Order.

Concerning culture, Cardinal Cisneros ran a number of great projects, like founding the first Renaissance University, the Universidad Complutense in Alcalá de Henares, or publishing the first edition of the Bible that included a translation into Latin along with their original languages. He is certainly one of the key figures to understand Renaissance and Spanish history.

Besides the two Campos del Renacimiento Territorial Museum sites, there are two additional museums that can be visited in Cisneros and that provide a deeper insight into the local history and culture. These are the Extinct Jobs Museum and the Dance Museum. Cisneros has a dancing ensemble of its own, specialised in local folk dances, including the famous Danza del Paloteo (‘Stick Dancing’) typically performed in early September to honour the local Virgen del Castillo.

This museum-like tour makes its final stop in Fuentes de Nava, a town that got to have as much as five churches. The last site in Campos del Renacimiento is in St. Mary’s Church and, among other treasures in this temple, its polychromed Mudejar coffered ceiling -wonderfully preserved after being restored- and Alejo de Vahía’s Assumption sculpture stand out. In Fuentes de Nava, the 65-metre high late-Gothic tower in St. Peter’s Church is remarkable as well. This bell tower is known as the ‘Campos Star’, the most characteristic landmark in this Tierra de Campos town. Inside the temple, the main altarpiece by Juan de Valmaseda shines in its own right, along with works by Alonso de Berruguete and Juan de Villoldo, among others. 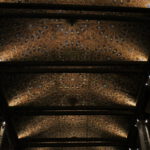 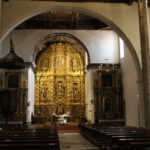 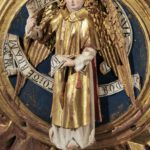 Fuentes de Nava is unique not only because of its rich artistic heritage, but also because of its beautiful and well-preserved natural landscape. This town is located in the Laguna de la Nava wetland, typically known as ‘the Field Sea’, which belongs to the la Nava and Campos de Palencia Natural Area, where more than 289 species live -254 different species of birds being of particular interest.